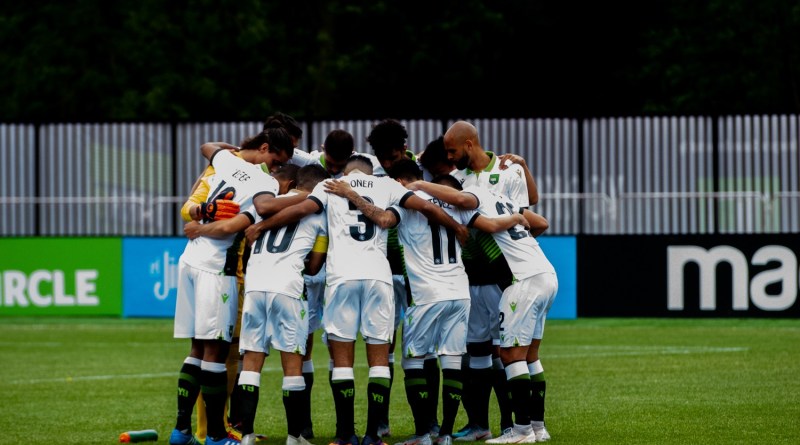 2020 is already a remarkable year for soccer players in North America. The Major League Soccer Players’ Association (MLSPA) won significant improvements to their collective agreement, including a higher wage budget, a share in media revenue, an increase in the minimum wage, and greater player mobility. The United Soccer League Players’ Association (USLPA) added USL League One players to its membership after voluntary recognition from the league, affording a collective voice to more players, many of whom suffer from well documented precarity and low wages. On the heels of these achievements, sources are indicating that Canadian Premier League (CanPL) players have begun organizing amongst themselves to form a union. 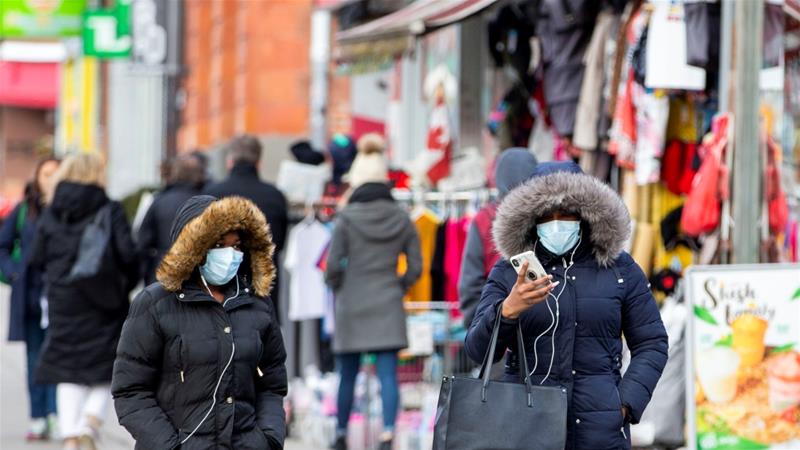 Coauthored with Kate Shao and Kennes Lin for Aljazeera
https://www.aljazeera.com/indepth/opinion/sinophobia-won-save-coronavirus-200208165854849.html

Shortly after the first Canadian case of the new coronavirus was announced in January, David Shao, a healthcare worker from Winnipeg, the capital of Manitoba province, was taunted by colleagues to go home and stop “spreading the virus”. He was not sick; he was, however, the only Chinese person in his workplace.

As someone who grew up in Hong Kong during the severe acute respiratory syndrome (SARS) epidemic, I have a deep familiarity with the trauma and distress associated with disease outbreaks. With school cancelled for almost a month, my eyes were glued to the daily death counts on the television. The fear and panic was palpable, with the city’s usually packed malls and restaurants emptied. But this legitimate fear of sickness or loss can also often entangle with deep-seated racism, where fear becomes a licence for xenophobia. This was certainly the case during the SARS outbreak in Canada – today, we are witnessing a rerun with the novel coronavirus (2019-nCoV) outbreak.

Ever since Mr. Bao arrived in Canada, he worked in grocery stores. While he has since retired, the backbreaking tasks are forever ingrained in his muscle memory. The exhausting work of mopping the floors, stocking the shelves, and wiping up spills are beautifully captured in the movements performed by Mr. Bao and artist En Lai Mah in the film, Money Moves. The work of being a grocery store employee caused tremendous strain on Mr. Bao, resulting in numerous injuries, including inflammation of his legs and the spraining of his arm. Despite these major sacrifices, wages were low and often below minimum wage stipulations. Hours were also long – up to 12 hours a day – with no overtime pay provided.

Unfortunately, these conditions are not exceptional. This was evident during a rough-cut screening of Money Moves to a tightly packed audience of largely Chinese blue collar workers. Audience members were moved by the film and emboldened to share their own experiences of abuse and injury. A restaurant worker in particular was in tears recounting one such injury, thanking Mr. Bao and En Lai Mah for their courage in telling this story. 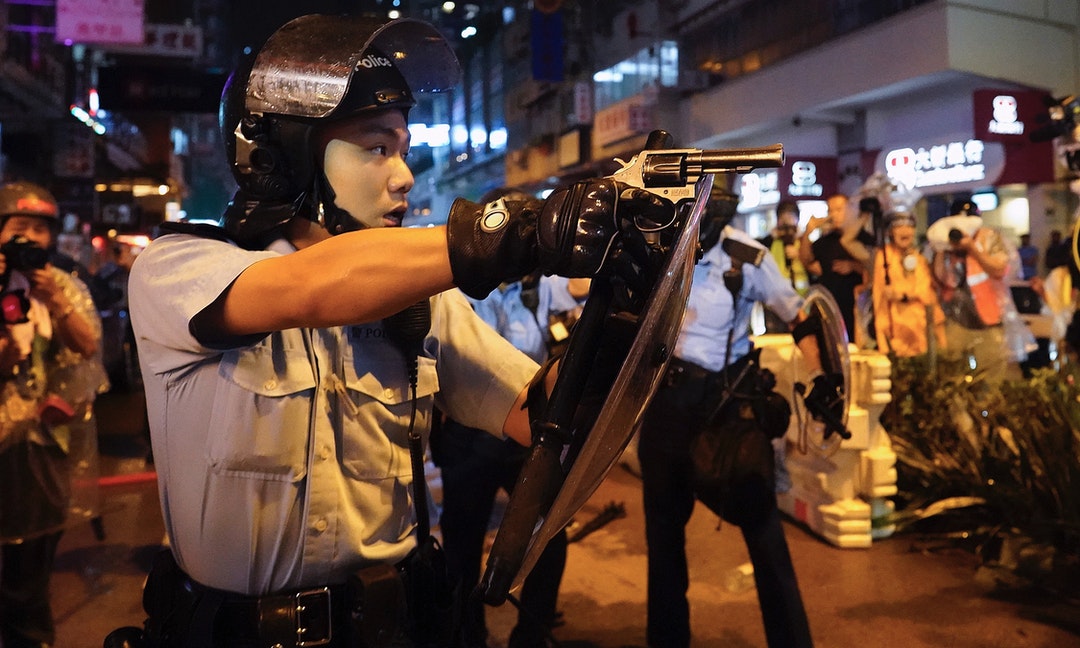 Tensions with the police have reached a breaking point in the wake of the death of HKUST student Alex Chow Tsz-lok, who succumbed to his injuries on November 8 after falling from a parking garage where police were dispersing protesters. On November 10, riot police fired tear gas into multiple university campuses, a traffic cop shot an unarmed protestor with live ammunition in broad daylight, and a police motorcyclist was filmed ramming into protestors, in one of the movement’s most traumatic days yet. 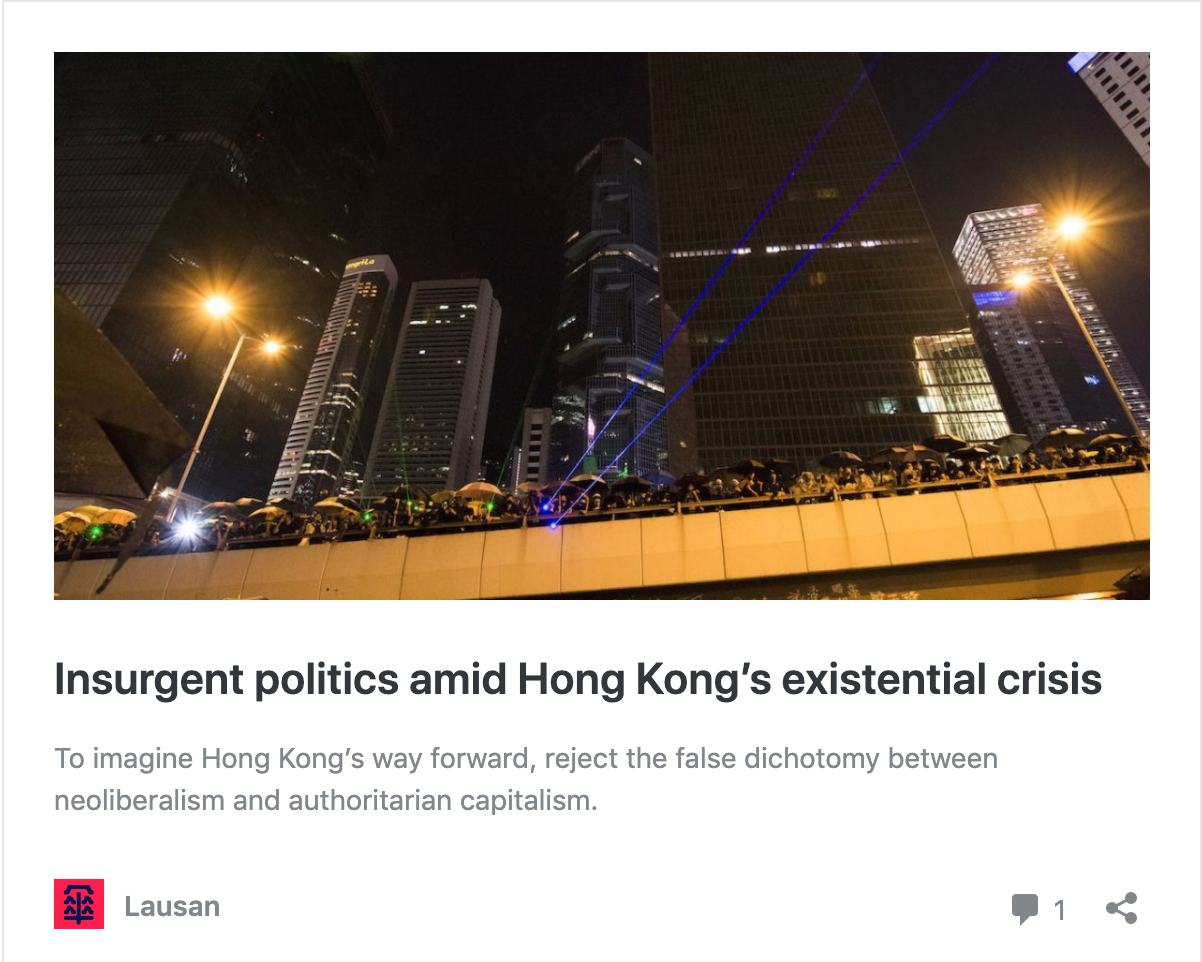 Even in a city like Hong Kong, where mass protests are commonplace, it is undeniable that the current resistance sparked by the government’s introduction of legislation to allow extradition to China is historic in scale and substance. For the past few months, there have been protests with attendances in the millions, almost daily confrontations with riot police, “non-cooperation movement” involving acts of civil disobedience targeting Hong Kong’s infrastructure, a general strike, and even multiple suicides as political acts, with no end in sight. The protest movement has coalesced around five demands: withdrawal of the extradition bill, retraction of the riot designation for the June 12 protests,[1] amnesty for arrested protesters, inquiry into police conduct, and implementation of universal suffrage.[2]

Unfortunately, the coverage of these struggles both in the West and in China have been marred by oversimplification. There have been ongoing attempts by people to impose narratives on to an amorphous and divergent protest movement. For example, Western media and Chinese state media have been inundated with images of Hong Kong protesters flying colonial and American flags, despite flag bearers representing a small segment of the crowds. For Western far-right activists, it shows that the Hong Kong protest movement is serving as a flashpoint for the defeat of communism, “[a]s Berlin was to the Cold War.” For the Chinese state and its supporters, these flags are evidence that the protests are symptomatic of a colonial mindset instilled by British colonizers and mobilized by Western forces.

Lost in the coverage is the fact that the waving of these flags have not gone unopposed. During a protest at the Wan Chai police headquarters on June 21, protesters chanted “take back the flag” at a colonial Hong Kong flag bearer who had climbed up a fence. Posters on LIHKG, a message board that has served as the main organizing platform for the protests, have also consistently criticized Western flag bearers. Conversely, the British colonial regime and its political framework is perpetuated in Hong Kong’s current governance model—not in opposition to but intertwined with the Chinese state. Many of Hong Kong’s Chief Executives and high ranking police officers have been inherited from the colonial government, as have police tactics and technology.[3]

The imposition of narratives by outside forces, including various regimes and capitalists, has been a consistent feature of Hong Kong’s existence, with Hong Kong’s raison d’etre limited to that of an interface between China and global capital, or a pawn for geopolitical conflict. But Hong Kongers are fighting back and staking a claim for self-definition. One of the more prominent slogans of these protests has been Bruce Lee’s “be water,’’ a call for protesters to be adaptive to changing conditions. But Bruce Lee also reminds us that water does not just flow, it “can crash.” Just as water crashes against the shore, slowly eroding cliff faces, imposed narratives are being eroded away by the tenacity, organicity, and participatory nature of the protest movement, creating challenges and opportunities for the imagination of a new politics in Hong Kong and beyond.

The consolidation of the social work profession in Canada was critical to the settler colonial project. Parallel to the rise of the modern police force, the accounting bureaucracy, and the colonial legal apparatus, the social work profession is a foundational component to the creation, expansion, and adaptation of the settler state. Through a historical review of the origins of social work and its professionalization in Canada, this paper argues that contemporary social work and social service provision remain circumscribed by the logics of conquest, extraction, apprehension, management, and pacification that advance the settler project and seek to secure settler futurity. Given the incommensurabilities between social work practice and Indigenous processes of decolonization this paper explores potential pathways towards unsettling social work practice including disrupting dehistoricization (working towards the repatriation of Indigenous lands, children, and cultural traditions and the upholding of Indigenous sovereignty); working towards deinstitutionalization (challenging the institutionalization of service provision and re-focusing on mutual aid, treaty responsibilities, and settler complicity; and promoting deprofessionalization (the restructuring of the ‘helping’ practices of social work back under the control of communities themselves. 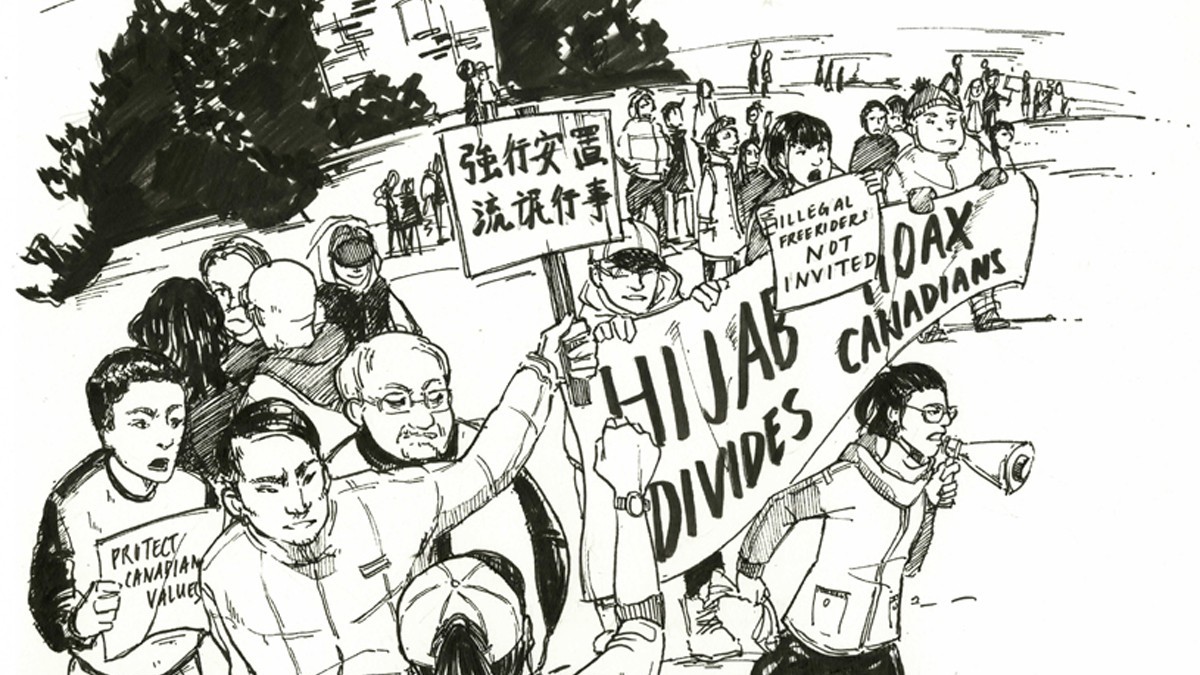 During the 2018 Ontario elections, a campaign pamphlet for Progressive Conservative (PC) candidate Raymond Cho was distributed with the words “為人民服務” – “Serve the People” – in bold. The phrase is one of the most iconic Maoist slogans – but in this case, it was used as a crude translation of Doug Ford’s slogan, “For the People.”

While the NDP won the majority of downtown Toronto ridings, they were locked out of the suburbs, where the PC Party rode to a decisive victory across the commuter belt of Mississauga, Markham, Etobicoke, and – to a lesser extent – Scarborough.

For some this was unexpected: suburban working-class and immigrant communities might have been expected to side with the Liberals or NDP, more so than the generally whiter and wealthier downtown communities. After all, left-leaning parties are supposed to be the champions of the poor and racialized. For others, election results confirmed a growing belief that Canada’s new wave of immigrants is both socially and fiscally conservative, innately.

We reject these two presumptions. Instead, we draw on the case of Chinese suburbanites in Scarborough and York Region to argue that the electoral success of the right is the result of decades of disengagement by the left and sophisticated politicking by right-wing politicians. 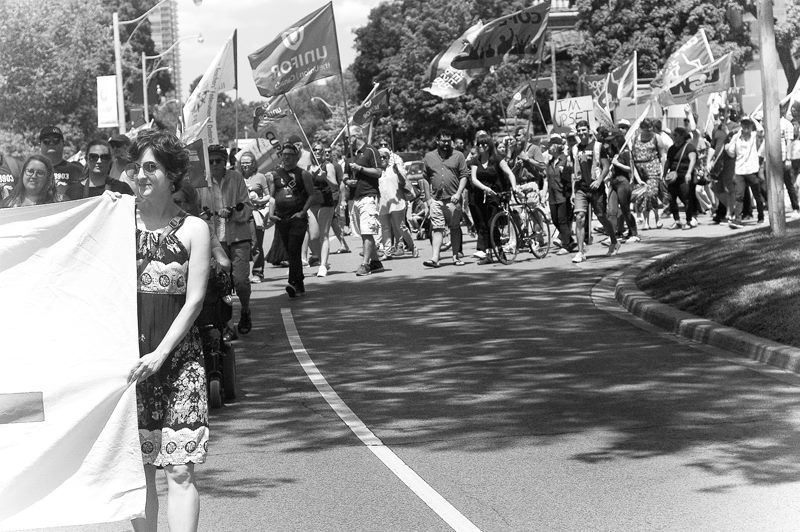 Wong, E. H. S. (2018). The detachment of intersectionality from its Black feminist roots: A critical analysis of social service provision training material based in Ontario. In Intersectionality in Social Work (pp. 51-65). Routledge.
https://www.taylorfrancis.com/books/e/9781315210810

This chapter takes as a starting point the use of intersectionality in a range of social services training materials. The critical analysis shows that the training material detaches the concept of intersectionality from its radical political roots. This has potential negative implications for social work practices. Most importantly, in emphasising service provision over mass movement building, there is a failure to undertake the social work task of advocating for societal change, and the spirit of Black feminist thought and liberation movements from which intersectionality emerged is lost.